“People of the past obtained a substance that modern generations do not have” -Weston A. Price

Traveling the world in search of the secrets of optimal health and immunity, Dr. Weston A Price noted a radiant wellness and unmistakable brilliance in the indigenous peoples of cultures unexposed to a modern diet. After a decade of carrying out the most compelling cross-cultural research around the globe, Price conducted groundbreaking research in his laboratory where he was able to pinpoint particular nutrients responsible for this remarkable robust health. It was through this detailed analysis that he isolated a critical unnamed fat-soluble vitamin he called the X-Factor or Activator X. For years people have searched for this mysterious super nutrient, desirous of its health-giving potential. Well, it turns out the X-factor now has a name: it’s vitamin K2. 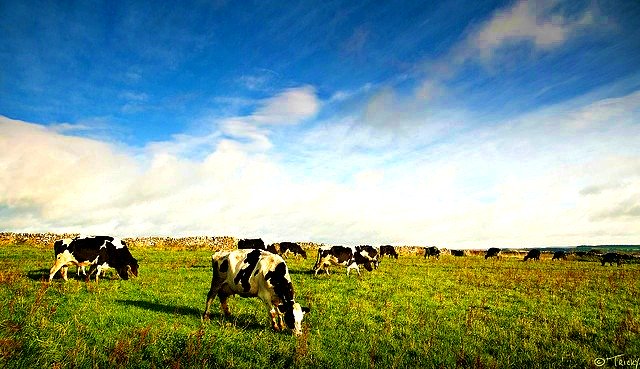 The Curious Tale of K2

Vitamin K2 has an interesting history in modern science. A fat-soluble nutrient, it was originally isolated along with its partner, vitamin K1, in a 1943 Nobel Prize winning experiment involving sickly chickens on a low-fat, low-cholesterol diet. While K1 was immediately heralded for its importance in maintaining appropriate blood clotting and coagulation patterns, it's distinctive relative, K2, remained an elusive “mystery vitamin” and was largely forgotten about. It wasn’t until a study published in 1997 that researchers began to understand that vitamin K2 is required for two crucial physiological processes: the delivery of calcium to the bones for appropriate deposition and removal of excess minerals from soft tissues to prevent calcification of vulnerable areas such as the arteries and kidneys. Today, a full understanding of the role of vitamin K2 is still being explored, though building information demonstrates that it is far more critical to bone and cardiovascular health than initially presumed. And what’s more, new studies are revealing that most of the population in modern industrialized cultures are significantly deficient in this essential nutrient.

At the same time that the popular science community was floundering around in a messy process of disjointed scientific studies, an extensive body of innovative work on the subject of K2 was being compiled by a rather non-suspect researcher. This luminary work, published in 1939, was none other than “Nutrition and Physical Degeneration” by Dr. Weston A Price. While Dr. Price did not mention vitamin K2 by name, he wrote extensively about the fat soluble nutrient Activator X, or the X-Factor. He noted that this substance, found namely in the butterfat and organs of grass fed animals, was key to proper bone development, immunity, sound neurological function and dental strength. In 2007, modern research about vitamin K2 and Price's lengthy documentation of the X-Factor were finally linked, bridging a longtime gap in the mainstream understanding of physiological nutrition.

The table below compares Price's discoveries about the X-Factor with modern scientific knowledge about vitamin K2, explaining in a more technical light the processes underlying his novel observations. 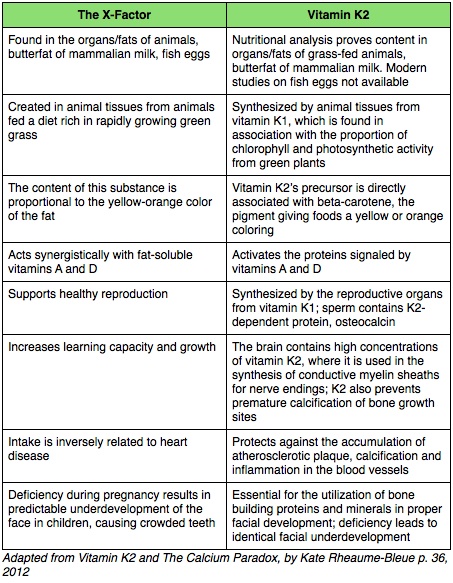 Where Has All The Vitamin K2 Gone?

As described by Dr. Price, vitamin K2 is traditionally found in animal products such as meat, fat, dairy and eggs. In an American diet dense with fast food burgers, jiggling egg substitutes and crunchy orange cheez-its, isn’t it shocking that we have such rampant K2 deficiency? Not at all when you consider the quality of our intake. Since the advent of industrialized agriculture our food supplies have become sadly nutrient bereft, and vitamin K2 is among the elements which have been almost completely obliterated. This travesty occurred primarily in the 1940s when farmers realized that livestock could be cheaply fed a diet of grains fortified with synthetic vitamins A and D, and could thus survive without ever having to see the sunlight. With all of the animals raised neatly in massive commercial buildings, production capacity skyrocketed as did profit. Vitamin K2 is synthesized from the chlorophyll ingested by cows, chickens or pigs when grazing in lush green pastures, which means that they must be in the sunshine to get it! When animals are left confined to dark spaces without movement and fed processed grains, there is absolutely no chance for K2 to be created. Today, we unfortunately need to make a highly conscious effort to get K2 into our diet and there are several ways to do so:

Vitamin K2 and the Calcium Paradox by Kate Rheume-Bleue, ND

On the Trail of the Elusive X-Factor: A Sixty-Two-Year-Old Mystery Solved by Chris Masterjohn, Wise Traditions

Find this post in The Healthy Home Economist's Monday Mania

*All articles and information on this website are for educational purposes only. They are not to be regarded or relied upon as medical advice. These statements have not been evaluated by the Food and Drug Administration. This product is not intended to diagnose, cure, treat or prevent any disease. Results may vary per person. Consult your health practitioner if you have health problems.