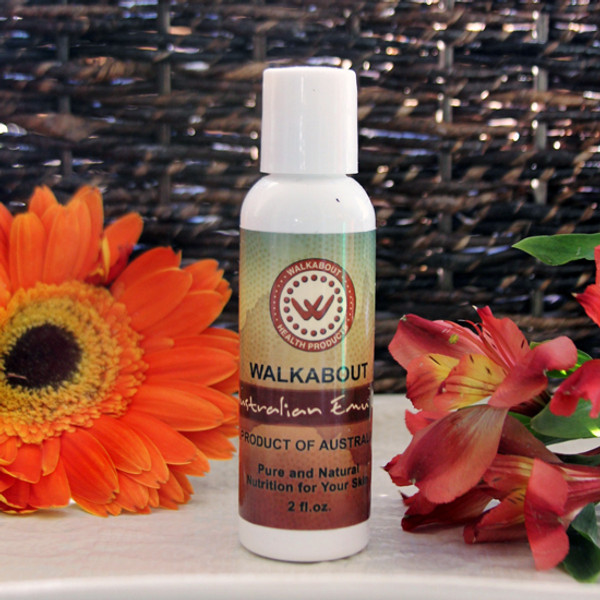 Powerful healing for the skin.

Emu oil is a traditional healthy fat with many properties that are nourishing and healing for the skin when used topically. Naturally rich in collagen, emu oil is regenerative in nature and also possesses anti-inflammatory and bacteriostatic properties. Many people find topical emu oil ointments to be curative for skin irritations and also highly effective when applied as an everyday moisturizer.

This topical oil is made from 100% pure and unadulterated Australian Emu Oil. No chemicals, added preservatives, or perfumes. Walkabout Emu oil is known for improving the look and feel of skin, in addition to reducing the swelling and scarring associated with minor scrapes, burns and acne. Use one drop at a time, as a little goes a long way.

Key Healing Factors of Emu Oil for the Skin:

A. The Emu (Dromaius novaehollandiae) is a large, flightless bird native to Australia. The Emu is from the Saurian age having lived on earth for more than 60 million years.

A. Emu oil is a traditional, sacred food of the Aboriginal Australians. They are the oldest living culture on earth, tracing their culture back more than 40,000 years. Like all so-called primitive people they knew and passed down the use of special foods needed for optimal health and development. These special foods had concentrations of nutrients far beyond those found in foods generally available to most of us today. The Emu has been used by the Aboriginal Australians as food and bush medicine for more than 40,000 years. The Aboriginal people passed down knowledge by word of mouth so it wasn't until 1860 that Emu oils traditional use was first recorded by G. Bennett in his "Gatherings of a naturalist in Australasia." He reported that Aborigines and early white settlers used Emu oil to heal wounds, reduce pain and relieve various muscular disorders. The Emu was so revered by the native Australians that it is part of their mythology.

Q. Are there historical records about the traditional use of Emu Oil?

A. In addition to G. Bennet, Dr. Weston Price, a pioneer in nutrition, analyzed the diets of primitive people on his historic research expeditions of the 1930s. In all fourteen isolated cultures he studied, all the members, eating their traditional diets, enjoyed superb health. They were free of chronic disease, they were strong and attractive people, and they produced healthy children generation after generation. He also found that once these same people started eating a Westernized diet: refined grains, canned foods or denatured foods, refined sugar, they experienced tooth decay, degenerative disease and infertility. He analyzed the nutritional contents of both the primitive and Westernized diet, did physical assessments, dental x-rays, bone densities and mental assessments. "Dr. Price consistently found that healthy primitive people consumed a diet containing at least ten times the fat-soluble activators – vitamins found only in animal fat- compared to the typical American diet of his day." Price considered these fat-soluble vitamins to be the key components to healthy diets. Price was very interested in the Aboriginals as they "are associated with animal life which is unique in being characterized as a living museum preserved from the dawn of animal life on the earth." The Aboriginals favorite foods were fat from the "intestines of marsupials and emus."

Q. Why is Emu Oil considered a life sustaining fat?

A. Emu oil is derived from the fat of the bird. An Emu is one of a few birds that build up fat storage as part of a survival mechanism. The Emu can live for months without food or water, stay a healthy bird and reproduce while living in one of the most inhospitable places on earth, the Australian Outback. The male Emu sits on his cluster of eggs for 54 days without leaving the nest for food or water. The seasonably accumulated fat layer is his only source of nutrition during this time. His nutritional requirements for his survival are stored in his fat/oil reserves. Hibernating animals such as bears, hedgehogs, snakes, etc, also accumulate this type of nutrient dense fat, seasonably built up and depleted. The Emu is the only known warm-blooded animal able to provide this type life-sustaining fat/oil on a commercial basis.

A. Yes. Walkabout undergoes strict testing and fulfills strict guidelines set by the Australian government and it is registered with the Therapeutic Goods Administration (TGA) in Australia. TGA is Australia's regulator of therapeutic goods. The Emu oil meets all international food safety standards. Hazard Analysis and Critical Control Points (HACCP) and Good Manufacturing Practice (GMP) certification. We are unaware of any known allergy. If you should have a sensitivity to poultry or fats you should check with your health care professional.

Q. How do I store Walkabout Emu Oil?

A. Store below 78 degrees. Avoid storing in direct sunlight or heat. Emu oil is unadulterated so when it gets cold it will become more solid, when warmer it will be more liquid. You may need to warm the bottle in your hands or put in warm water (not hot) for a short time. This is what oils/fats do naturally.

Q. How do I use topical emu oil?

A. Apply directly to skin as you would any other moisturizer. Start with just one drop at a time, as a little goes a long way.

How to Use Emu Oil: Aboriginal superfood