Tonight my family had bacon for dinner. Yep, it was one of those nights where everybody wanted breakfast for dinner and bacon sounded too good to pass up. What I love most about cooking bacon though, is all that yummy, nutrient dense fat that pools in the bottom of the skillet. The best part is, when it comes time to fry the eggs, they are cooked in the delicious taste of the bacon “leftovers,” and it got me thinking about the benefits of animal fats. Lard is that famous fat that grandparents use to love and save jars of in the pantry. So what exactly is it?

Lard is pig fat. It is created by rendering, the act of slowly heating up fatty cuts of pork to draw out the fat from the tissues and evaporate any water. The pure white fat that is left over from this process is what we know and love as lard.

Animal fats used to be more mainstream than one would think.  Prior to the 1990s, McDonald's cooked all of their French fries in tallow or beef fat. That’s right! McDonald's used animal fats in cooking. However, with the great saturated fat scare at the end of the 20th century, McDonald’s rid their facilities of this precious animal food and replaced it with partially hydrogenated vegetable oils that are brimming with Trans Fatty Acids. So, what’s the deal on all these foods that were once prized and used daily, and yet now are the scorn of “health talks” and have been replaced with partially hydrogenated oils such as canola, soybean, and other vegetable oils? (1)

About 50 years ago, there was great debate on what fats were actually healthy and what might be causing disease. This was a time when men were passing away from heart attacks long before old age. Congress was in a great debate over the Standard American Diet and wondered if consuming saturated fats was to blame for the increase in heart disease. Ultimately, by the early 1990s, saturated fat was deemed to be the culprit of all these modern day health scares, and taken off the shelves of most grocery stores and out of restaurant kitchens. Non-fat yogurt, white potatoes, and breakfast cereals were in, and full-fat foods such as nuts, avocados, and coconut oil were out. Sadly, though, by cutting out one thing, and replacing it with another, Americans were forming new health concerns – obesity and diabetes, resulting from the increase in consuming heavily processed restaurant foods, baked goods and snack foods. The reality is, certain kinds of fats, particularly animal fats from healthy and cared for animals are some of the best fats you can put in your body. But as always, not all fats are created equal! So let’s take a look at five benefits of cooking with healthy fats such as tallow or lard. (2)

The first benefit is the healthfulness of cooking with lard and tallow. As I stated above, tallow comes from beef fat, while lard comes from pork fat. These two fats, in particular, are at the top of the list as far as nutrition quality. First, they have none of the trans fatty acids that vegetable shortening does. In addition, they are high in monounsaturated fats, which is shown to actually lower the risk of heart disease. Third, lard and tallow both have a perfect ratio of Omega 3 fatty acids to Omega 6. And lastly, tallow and lard are both high in vitamin D, which is shown to improve the overall immune system. (3)(4)

The second benefit of cooking with real animal fats is simply the flavor. Let’s face it; fat tastes good! How many of you have had rolls crisped to perfection in lard, or steak cooked in tallow – its own fat? Yum! Foods cooked in animal fats not only taste so much better than those cooked in rancid vegetable oils, but they are much higher in nutrition as well.

Third, is the benefit of following our ancestral tradition. In the early primal ages, people did not have factory fats and vegetable oils to live off of. They lived off the land. Our primal ancestors thrived by living off the land. As I stated at the beginning of this post, not even a century ago, our grandparents thrived eating traditional fats. I still hear my Dad share stories of when he was a child and his grandmother used to pour the bacon grease in a jar and savor every bit of it. Cooking with animal fats is a nourishing tradition, and far outweighs modern day use of commercially processed vegetable oils.

The fourth benefit is the cost savings of cooking with animal fats. If you are like me, pinching every penny and looking for ways to save is a must in following a traditional ancestral diet. These foods surely are not cheap! Might I add that here in southern California I am paying $17.99 for one gallon of raw milk. So, if there are other opportunities to save, I jump on them. One of the blessings and benefits of cooking with animal fats such as lard or tallow is that they can be reused. In other words, when you are through cooking and there is still a puddle of fat at the bottom of the skillet, it can be filtered and put back in the refrigerator for another use! (5) 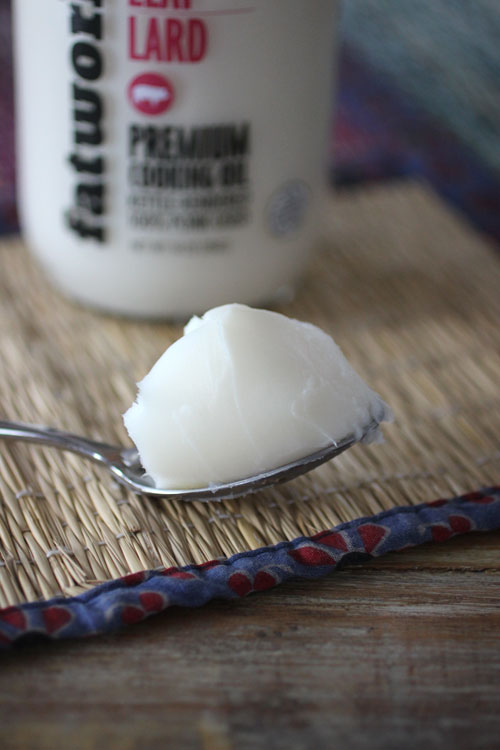 The fifth, but certainly not the last benefit, is the sustainability of cooking with animal fats. When an animal is killed, every part of it should be utilized or eaten. Certainly, as always, sourcing is so important. Tallow and lard from animals raised on healthy pastures, and that I know are free of parasites, hormones, and antibiotics is crucial. After all, the animals that are raised the best, will produce the healthiest food sources. Check out our loved and respected brand, Fatworks, which sources both Lard and Tallow. I enjoy them both regularly!