Back in the 1800s, homeopathy was the choice medicine in America and Europe. It was most often used and advocated for by European royalty, American entrepreneurs, literary giants, and religious leaders. By 1900, there were 22 homeopathic medical schools, over 100 homeopathic hospitals, and more than 1,000 homeopathic pharmacies. Imagine that! Popularity soared high amongst women, not only as users of homeopathy, but also as practitioners. The training of the 19th century homeopaths was above and beyond that of its orthodox physician colleges, and a higher percentage of graduates from homeopathic medical school passed their board examinations, then did the orthodox medical students.

So what happened to homeopathy? Clearly it excelled and was once more highly regarded as a from of medicine. Enter the American Medical Association (AMA). The AMA told graduates of homeopathy school that they could only join the AMA if they denounced homeopathy or at least agreed not to practice it. Long story short, homeopathy began to fizzle and is now considered the “alternative medicine.” I could write a whole series, or at least one long post, just on the history of homeopathy. However in this post I want to share with you some of the many benefits, as well as some tips for reviving homeopathy in your own home. (2)

The Merriam-Webster dictionary states that homeopathy is “a system of medical practice that treats a disease especially by the administration of minute doses of a remedy that would in larger amounts produce in healthy persons symptoms similar to those of the disease.” So basically, it involves administering the smallest amount of an active substance to an ill person that a normally healthy person would become ill from in higher amounts. In other words, “like cures like!” (3)

It can also be used for more minor issues like bruises, scrapes, toothaches, headaches, nausea, coughs, and colds. (4)

Homeopathy can be particularly supportive for those struggling with allergies and asthma. By giving patients very minute dosages of the substances that are causing them their allergies in the first place, they can develop immunity and antibodies toward the substances and see a reduction in their symptoms. (5)

There have also been several studies demonstrating the usefulness of homeopathy for pain management. One controlled, randomized study included 43 patients suffering from chronic lower back pain. Over the course of 18.5 months they took homeopathic remedies and by the end of the trial period many of the patients reported a significant decrease in pain. (6)

Because homeopathy addresses the person as a whole, it also takes emotions and stress levels into account. In fact, homeopathy is widely known for its ability to treat anxiety and depression. It is often used alongside psychotherapies, such as Cognitive Behavioral Therapy, to treat symptoms of mental disorders and their accompanying physical symptoms like insomnia, fatigue, muscle aches, and more. (7)

If you are just starting out, or becoming an old pro, Radiant Life has a couple of different everyday homeopathy kits to try out! First is the Everyday Family Kit, which has 32 different remedies all in 30c potency. The other option is a smaller, travel size kit, which contains 20 of the most common remedies in the 30c potency. 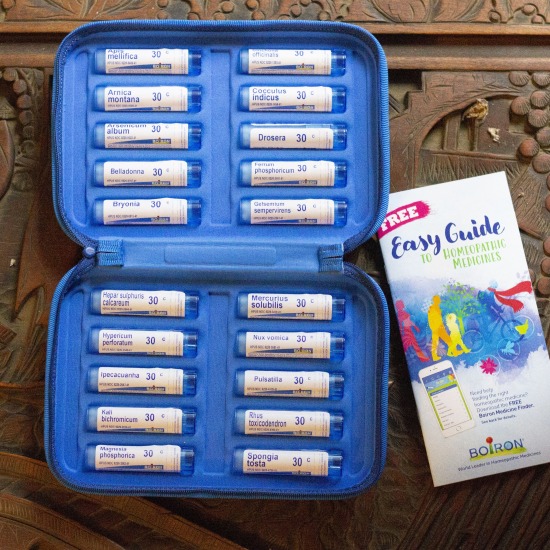 Homeopathy is truly a wonderful medicine! Here are some tips to consider as you try it out:

Before I conclude this post, I wanted to share one personal story of success with homeopathy. A few years back, my family rescued a Chesapeake Bay Retriever. Taylor was 4 years old when she became part of our world. Upon picking her up, she was terribly skittish and shook in the corner, not letting anyone near her. Long story short, we took her to the vet and they wanted to put her on anti-anxiety and mood related drugs for dogs. I knew there had to be a better way and decided to give homeopathy a try. I dosed Taylor Ignatia 200 twice daily in some raw milk. She lapped it right up and slowly but surly I saw her blossom and come alive. Today she runs the yard, jumps up for hugs, and wags her tail as soon as I walk in the door. What a joy she has become! You can read more about my journey with Taylor in this post here.