Since ancient times, mankind has tried to protect its most valuable products against the damaging effects of light. The early Egyptians, for instance, preserved their precious substances in gold or violet jars. Modern times have introduced many new forms of packaging. Glass, which has been known for ages, is still one of the most widely used materials. However, most of the traditional colors used in glass packaging (clear, amber, blue and green) allow visible light to pass through and therefore don’t offer enough protection against the decomposition processes that are induced by visible light.

The VioLiv Difference: It's the Frequencies!

Developed by Swiss scientists, Miron Glass, known as VioLiv Vitality Glassware (VioLiv) in the USA, does not allow light from the visible spectrum to penetrate (with the exception of violet radiation) but is transparent in the infrared spectrum. Black glass doesn’t allow any visible light to go through and is also transparent in the IR spectrum. The most important difference between these two glass types is that black glass fully absorbs UVA and violet frequencies without allowing any transmission to occur, while VioLiv is permeable for these frequencies. These wavelengths partially enter VioLiv Vitality Glassware, giving it a unique quality: impermeable in the visible light spectrum from blue to red but open to penetration of UVA, violet and IR frequencies. Due to this special combination, sensitive materials stored in VioLiv Vitality Glassware are highly protected against the processes of decomposition caused by light influences from the visible spectrum and gives it the added benefit of the positive effects that result from UVA, violet and IR frequencies.

Over the last few years, several scientific tests* have been carried out concerning the protective quality of VioLiv Vitality Glassware. For example: Cherry tomatoes were stored for 6 months under same conditions in White glass and Violiv violet glass. The result of this biological experiment was photographed for this purpose, the cherry tomatoes were taken out of the bottles, and the microbiological changes of the tomatoes stored in both bottles were photographed. The cherry tomato stored in violet glass retained its red color and had not dried out, contrary to the tomato stored in clear glass. This simple test demonstrated clearly that violet glass is the best glass for optimal protection of bio-energy over a long-term period!

Dr. Hugo Niggli and Dr. Max Bracher confirmed this scientifically by performing an experimental test on storage stability of various herbs and spices. Below is the results of storing chives in VioLiv, amber and clear glass: 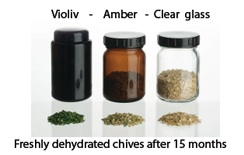 The sun emits  a light spectrum that has both visible and invisible parts. The visible spectrum is visible to our eyes when white light is channeled through a glass prism. At the same time, however, the light also contains a part that is invisible to our eyes and is in the range of electromagnetic wavelengths of infrared and UV-A. Sunlight allows all plants to grow. If plants remain exposed to sun after reaching maturity, the effect of the light changes and accelerates the process of molecular breakdown. Violiv Vitality Glassware acts as a natural filter that only allows the sunlight to protect and improve the quality of substances of high quality. Violiv blocks the entire spectrum of visible light with the exception of the violet.  At the same time allowing a certain part of being permeable to radiation in the spectral range of UV-A light red, and infrastructure. This unique combination provides optimum protection against the aging processes that are released by visible light.

VioLiv glass bottles both restructure damaged molecules and kill bacteria, so water tastes better and hydrates more effectively. VioLiv glass delays rancidity in oils and vinegars, to maximize flavor retention and shelf life. So, if you are going to store your valuable, nutrient dense foods in glass, wouldn't it be best to choose VioLiv over other glass containers? 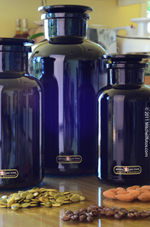