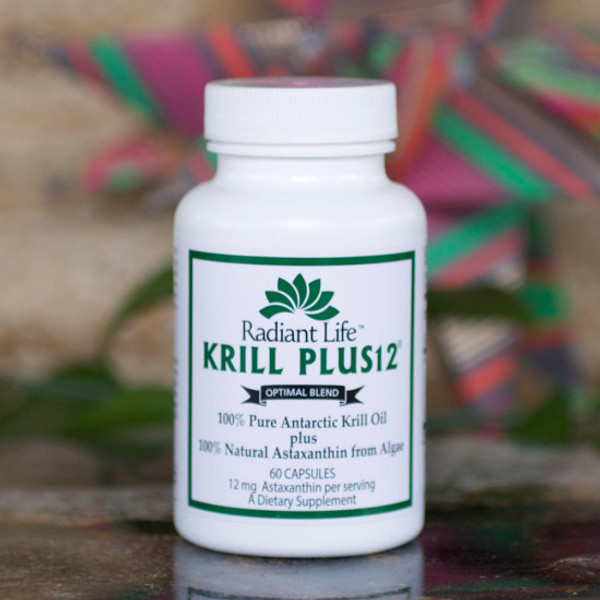 The best of both worlds! Radiant Life Krill Plus12 combines pure krill oil with the highest possible dose of natural astaxanthin, a powerful antioxidant from algae and phytoplankton.

The best of both worlds!

Krill oil is known for its high amount of omega-3s in bioactive forms of DHA and EPA. Add to that the antioxidant capacity of astaxanthin, and it becomes easy to see why this whole superfood supplement is something special. Potential benefits may include anti-aging, better brain health and mental stability, radiant skin, and improved blood sugar control.

Warning:People with seafood allergy, coagulopathy, or taking anticoagulants such as Warfarin (Coumadin), or other medications should notify their physician and be tested before taking dietary supplements.

Q. What is Krill?

A. Krill are a tiny, shrimp-like crustacean found throughout the world's oceans, the purest of which are sourced from the Antarctic. Krill are extremely low within the food chain feeding primarily on phytoplankton. It is believed that krill comprise the largest biomass on the planet.

Q. Why should I take Krill Oil?

A. Our Radiant Life Krill Oil is the purest of Antarctic krill. It provides an optimal combination of Omega-3 fatty acids (DHA and EPA) as well as phospholipids and important antioxidants to support overall wellness.

Q. Why would I take Krill oil if already taking fish oil and/or cod liver oil?

A. The Omega-3 in krill oil is mainly in the phospholipid form which research suggests is preferred to Omega-3 in the triglyceride form as it occurs in fish oil and cod liver oil. Phospholipid fatty acids represent key structural components of our cells and play a vital role in cell membrane functioning and thus the overall functioning of our cells, tissues and organs.

Q. Tell me more about the antioxidant nature of Krill oil?

Q. Does Krill Plus12 comply with environmental standards for fish oils?

Q. Should I refrigerate it?

A. NO! Refrigerating krill oil is not advisable and is not necessary to maintain its stability.

A. Some oils taste very strong. Ours is encapsulated within a plant cellulose capsule which makes it easy to ingest and digest.

Q. Why should I buy krill oil from Radiant Life when I can find it elsewhere?

A. Not all krill oil is alike. We ensure that our Krill oil is not only the purest available but produced in a sustainable, environmentally-friendly way.

A. There have been an impressive array of clinical studies demonstrating the value of astaxanthin as a supremely effective antioxidant.

Pure Krill Oil: What the fish oil people don't want you to know

Why I Take Astaxanthin Daily

The 5 Supplements that Healed My Acne Naturally

What is Krill Oil? Is it a Better Choice than Fish or Cod Liver Oil?